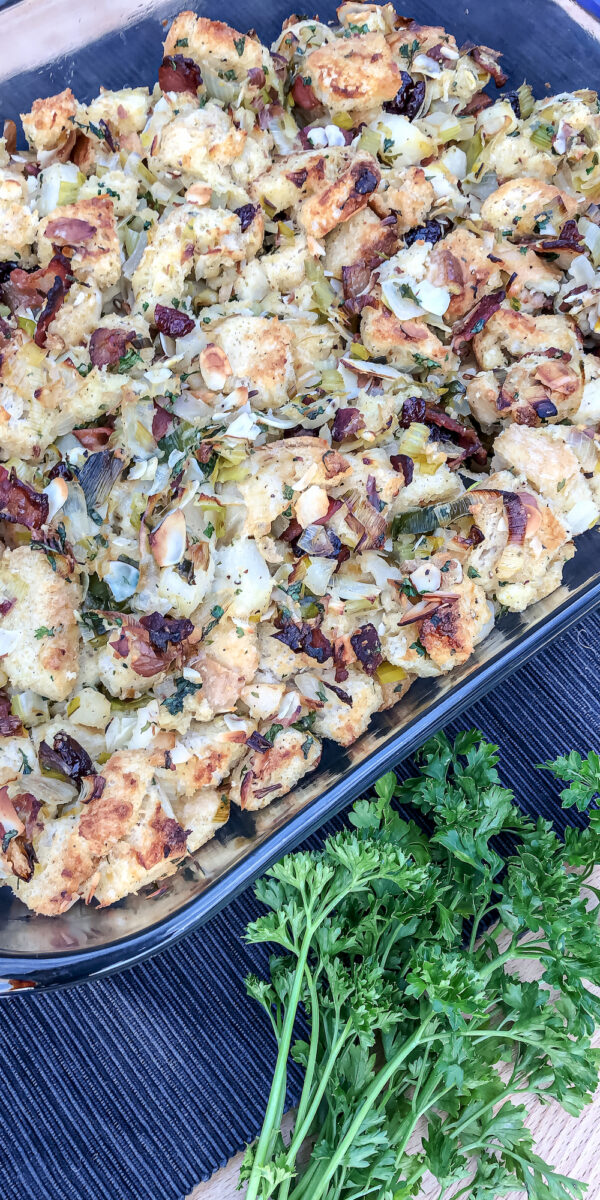 Everything’s better with bacon and this Bacon and Sourdough Stuffing recipe is no exception. Loaded with nearly a pound of bacon, dried cranberries, and pear, it’s the perfect side dish to serve alongside roast turkey, baked ham, or pork tenderloin. It is a delicious addition to any holiday table, but don’t limit this goodness to just Thanksgiving!

Many stuffing recipes use corn bread. Growing up, cornbread stuffing or Stove Top were served at EVERY turkey dinner. But sourdough is great to use as a stuffing base. It’s tangy flavor compliments many other flavors. This recipe adds  sweet pears, dried cranberries, almonds, leek, and bacon to the bread for a slightly sweet, bacon filled side dish.

Like so many people I started baking sourdough bread in March 2020. What else was I going to do with all my free time and no yeast on store shelves? But today, I am still baking sourdough because I love that pungent, tangy sourdough flavor. 4-5 days after baking day, if there is any bread left, I really like to cube it up, drizzle with olive oil and some fresh garlic to create salad croutons. Making stuffing or dressing takes those croutons a step further to create a really tasty side dish that my family really likes.

You can use most any bread for stuffing; whole wheat bread, sourdough, cornbread, English muffins, bagels, etc. The key to a great stuffing is the bread needs to be dried out, almost stale. Dried out bread will soak in all the cooking liquid and flavor without being soggy.

To dry out your bread, you can either cut it into cubes and allow it to dry out on the counter for a few days or place in a 375˚F oven for 10-12 minutes. See how to use sourdough stuffing in this recipe with bacon, cranberries, and pear.

For big holiday meals like Thanksgiving or Christmas, I like to make as much food as possible ahead of time. That way, I can spend less time in the kitchen on the actual holiday and have more time enjoying being with friends and family.

Want other make ahead side dish recipes? Try these:

Here’s What You’ll Need for this Recipe

Here’s how to prep this recipe ahead of time:

How To Make This Bacon Sourdough Dressing

2. Mix the bread cubes, olive oil, and garlic together in a large bowl.

3. Spread the bread cubes onto one large cookie sheet or two smaller baking sheets so that they are one even layer.

4. Bake bread cubes for 12 minutes or until golden brown. Stir bread halfway through and, if using two baking sheets, rotate position in the oven.

4. Remove the toasted bread cubes and return to the large bowl.

6. Cut up bacon into smaller pieces and place in a large skillet or dutch oven over medium heat. Fry until crispy and then drain on paper towels.

7. Pour off all but 2 tablespoons of bacon fat from the skillet.

8. Add the onions, celery, and leek to the skillet. Cook over medium heat for 12 minutes or until onions soften. Stir occasionally.

9. Add chopped pears and cook until tender, about 3 minutes.

11. In a mixing bowl, whisk together eggs and chicken broth.

12. Add eggs and chicken broth to the stuffing mixture and stir well to combine.

14. Add stuffing mixture to the baking dish. If stuffing is too dry, you can add up to an extra 1/2 cup of broth. Stuffing should be moist, but not soggy.

15. Place into a preheated oven and bake uncovered for 40 minutes, or until crisp and lightly brown on top.

16. Allow it to rest for 10 minutes before serving.

When you make this recipe, tag us at @LilFamAdventure in your post or story and let us know. We love seeing what your cooking and how you are getting adventurous with your family!