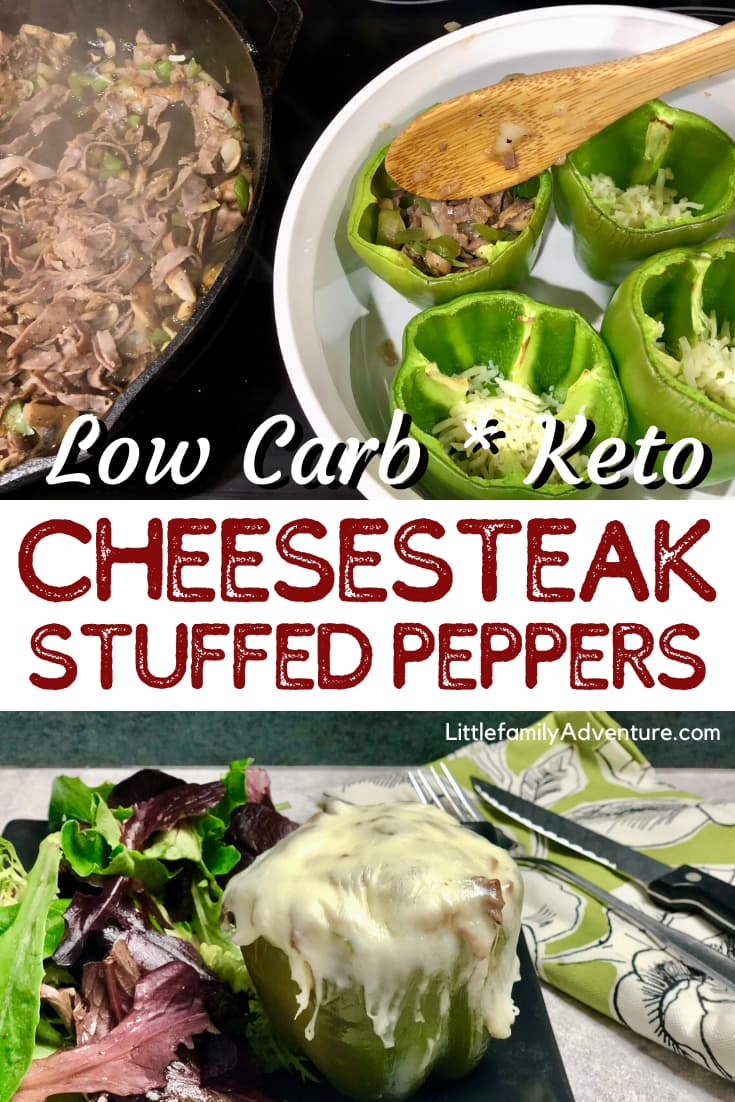 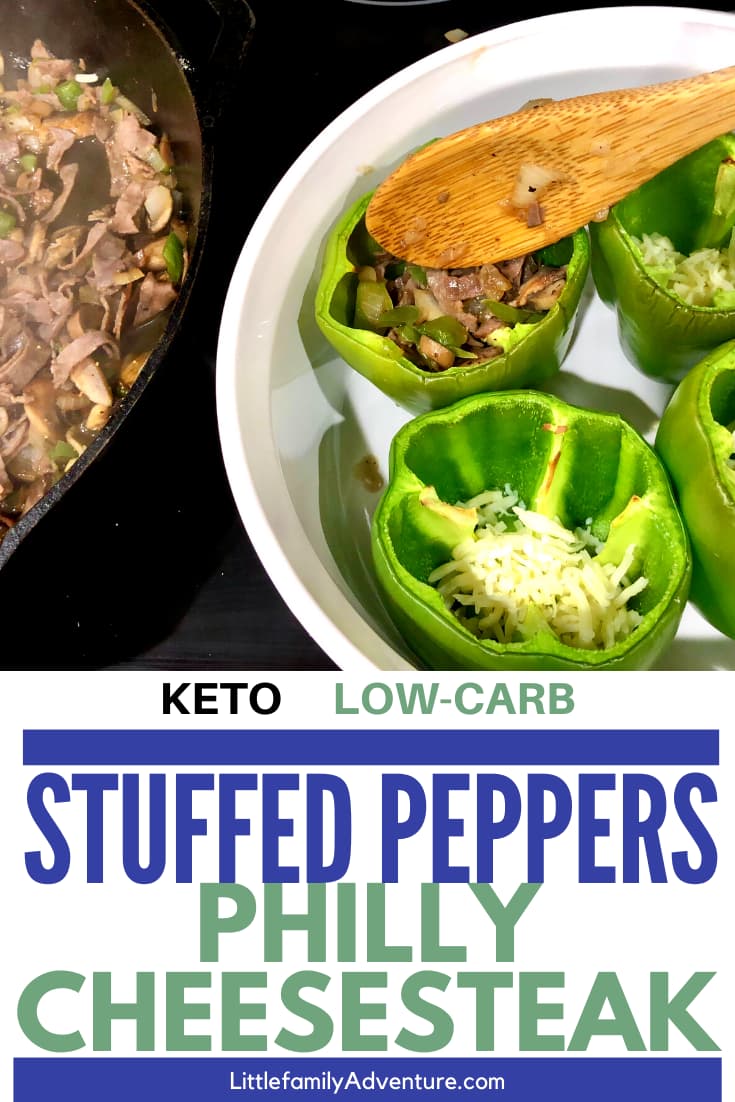 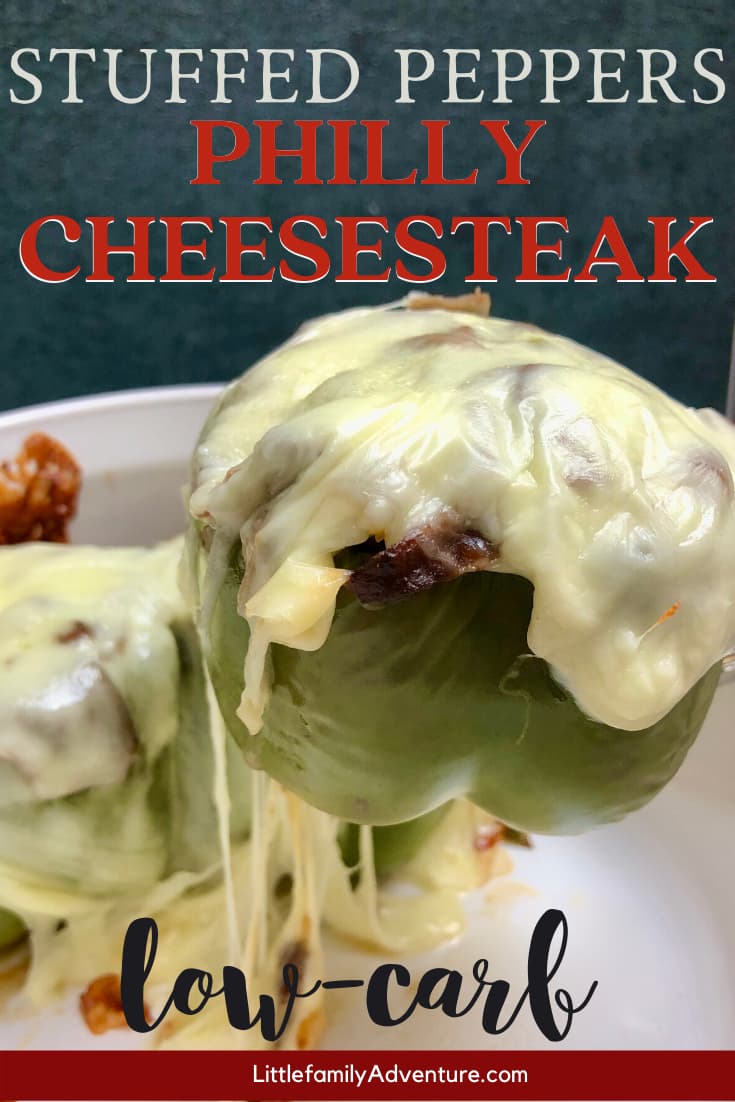 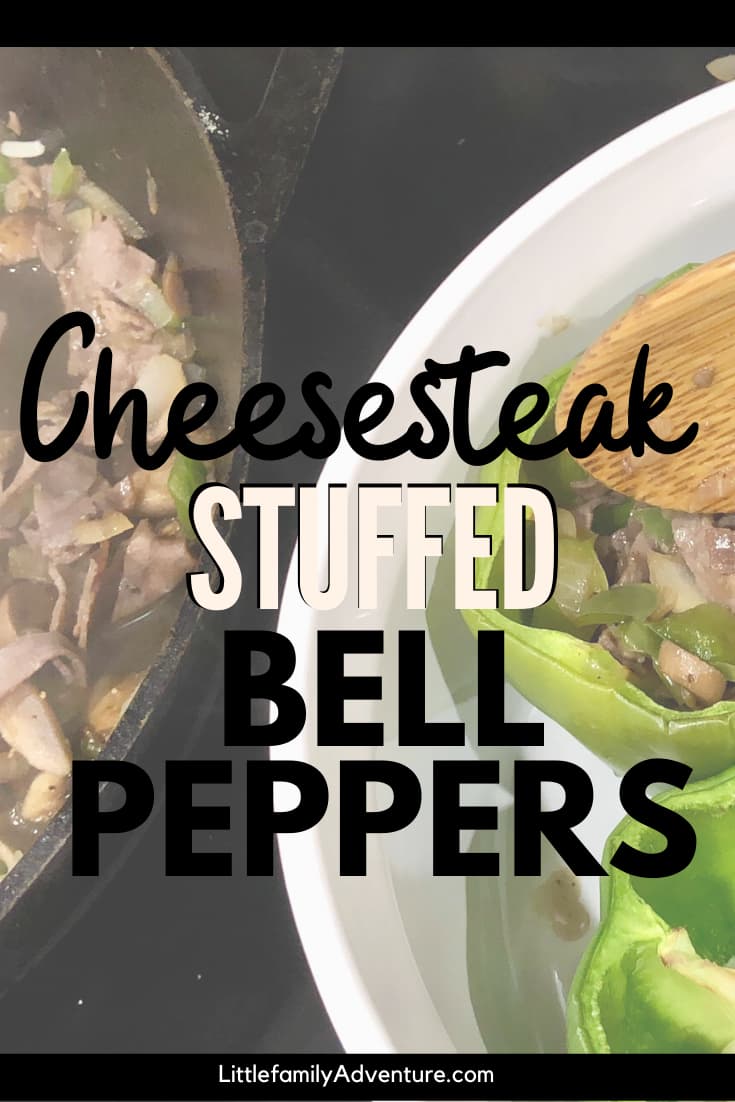 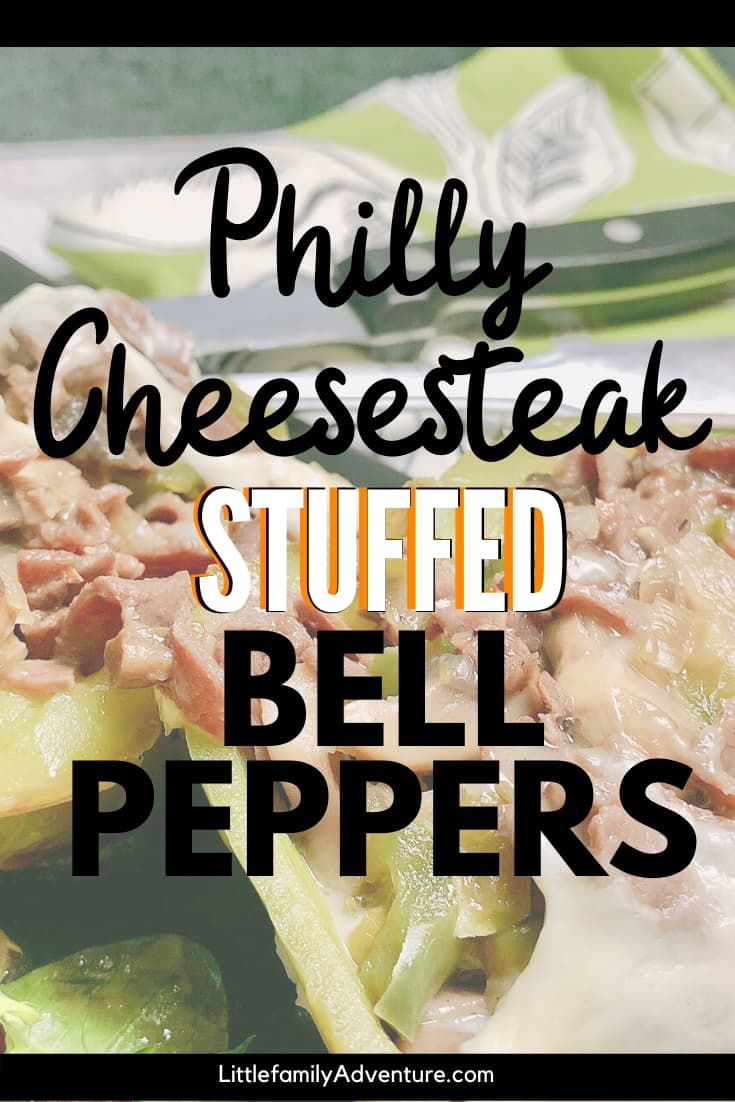 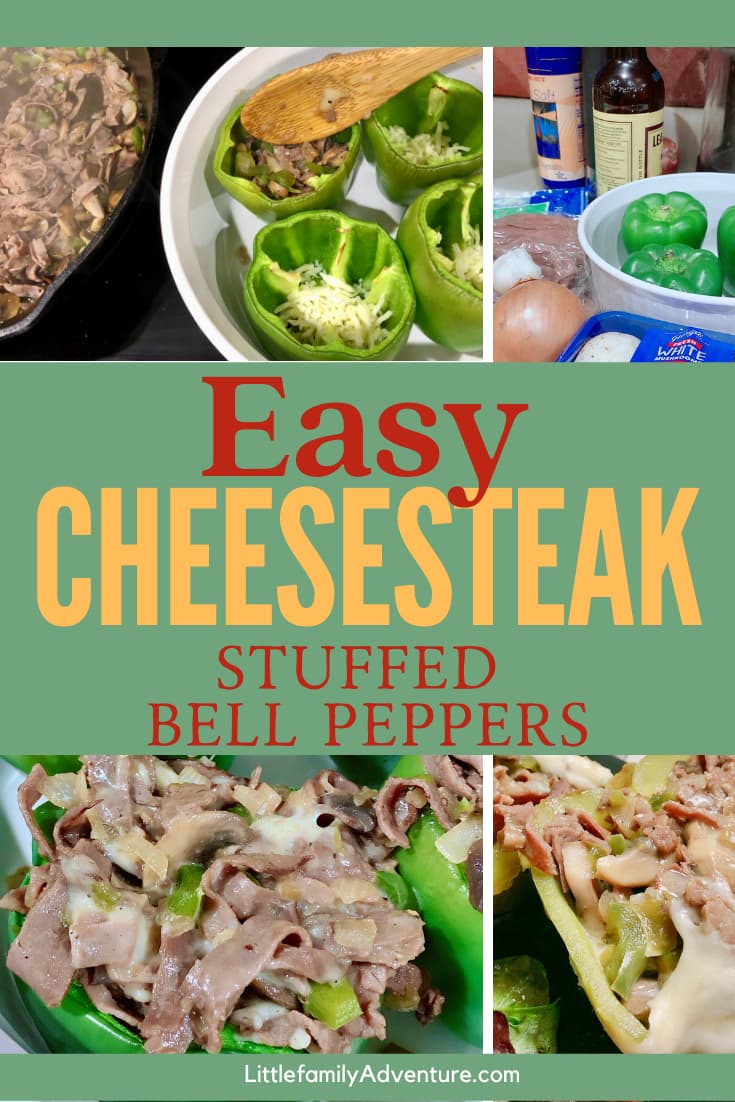 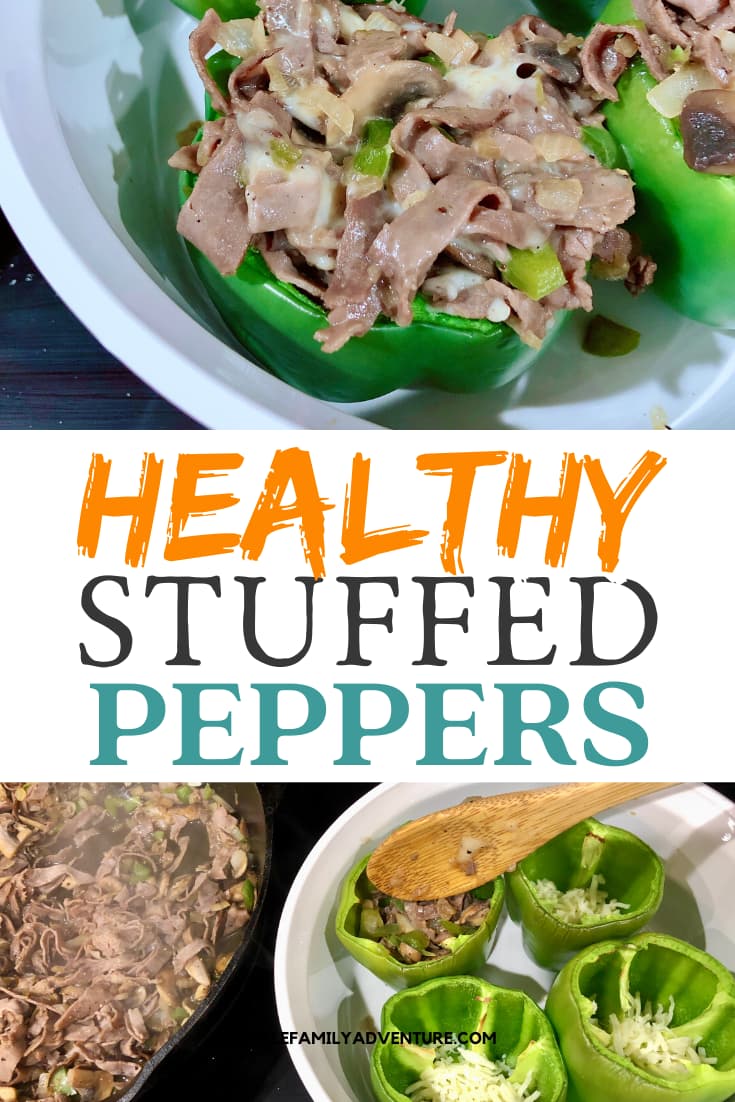 What’s not to love about a Philly Cheesesteak Sandwich with copious amounts of ooey-gooey mozzarella cheese, sliced beef, mushrooms, and bell peppers? Did you say carbs? Like you, I’m trying to cut back on carbs, so I took my recipe for a Philly Cheesesteak sandwich, ditched the bread, and created this easy Philly Cheesesteak Stuffed Peppers Recipe. It’s all of the flavors of a family favorite, just keto-friendly without the bread.

This recipe is a great weeknight meal to add to your weekly menu because it only takes about 40-45 minutes to make, can be prepped ahead of time, or batch cooked and frozen. I honestly think it tastes better the second day.

I use thinly sliced deli roast beef in this recipe. I know it’s traditionally sliced rib-eye or other beef steaks are used in cheesesteaks. But I prefer to buy pre-cooked at the deli. It’s just easier. When you make this at home, you can opt for rib-eyes or something else.

If you only have a short time to make dinner, prep and cook the vegetables and roast beef, ahead of time and store in the refrigerator. When you’re ready to make dinner, continue with the recipe by heating up the vegetables and meat over medium-high heat. Then add the cheese, stuff the peppers, and bake. When the cheese on top is melted and turning golden, they are done.

Pin This For Later………

If you are feeding a crowd,  this recipe can also be converted to a sheet pan recipe by doubling or tripling the recipe. Roast beef can be expensive if feeding a crowd, so I usually swap the deli roast beef for ground beef. Cook it separately and then add into the finished vegetables. Instead of cooking the peppers in a baking dish, use a baking sheet. Cut the peppers in half and lay out onto a large baking sheet. Scoop the cheese steak stuffing onto each and top with cheese. Here you can use shredded or slices of provolone or mozzarella to make things easier.

These Philly Cheesesteak Stuffed Bell Peppers are great when camping. There are a couple of different ways to cook them outdoors; as a foil meal, in a camping dutch oven, or grilled and deconstructed.

Prepare the filling according to the directions below using a skillet on a camp stove or over the campfire. As a foil meal, stuffed each pepper and wrap in two layers of heavy duty foil and place on a camping grate over medium heat. Cook until the peppers are soft. Using a cast iron dutch oven, cook over the campfire or use charcoal to regulate the temperature. If you want to grill the peppers, do that and serve them topped with the meat and veggies, topped with cheese. There are a bunch of options when cooking outdoors. All taste great.

If you liked this recipe for Philly Cheesesteak Stugged Bell Peppers, you may also like these recipes: