As a child, I remember going over to a friend’s house when her mother made fresh tortillas. The smell filled the house and we would line up to get them fresh off the grill. They were delicious all by themselves. But add a little butter or cinnamon sugar and they were heaven. Fast forward a few years, and head to Austin, TX. At Central Market on Lamar (either location), you’ll find fresh tortillas made in the store. My favorite were the butter tortillas. They brought me back to my childhood in Southern California. They were ohhhh so good and much better than any other store bought tortillas I’d had over the years. I remember buying several dozen at a time to bring back home and freeze until I needed them. 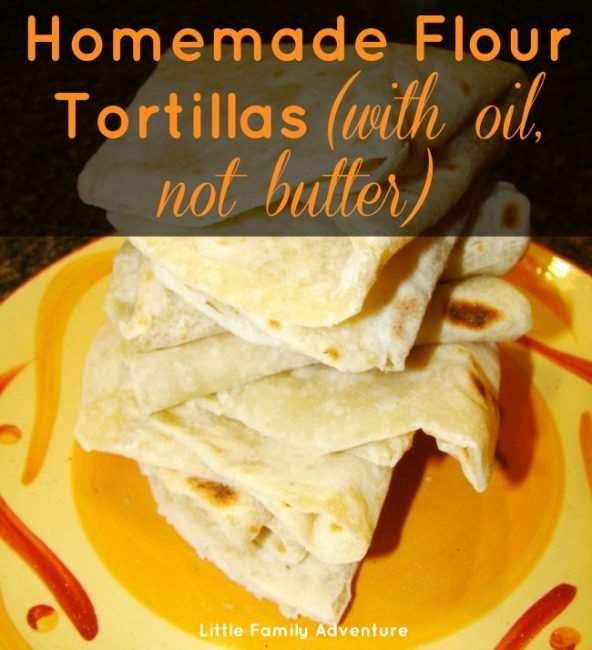 When I went back to California, there was a local store that carried fresh tortillas. They didn’t make them in the store, but they were very close to Central Market’s and my friend’s kitchen. A few doors down from the grocery store was a taco shop that had killer carne asada burritos. They were a meal in themselves (think 12 inches long and about 4 inches in diameter filled with marinated flank steak, pico de gallo, and guacamole).

About a year ago, I learned that I was lactose sensitive. So no more butter tortillas for me. I started looking at the ingredients in tortillas available at the grocery store hoping for something without butter.Let’s just say I wasn’t happy  with the ingredients I was finding. So I dug out my old recipe for flour tortillas with butter and started to experiment with different oils and flours. This recipe is as close, if not better than, the ones I had in my childhood. It calls for all purpose flour. I tried whole wheat in different proportions and it didn’t work. Only the white flour made tortillas the way I like them. I also tried different oils (except canola and corn because I don’t use them). Olive oil and coconut oil were the best two. The olive oil had a more authentic taste than the coconut oil. But try it for yourself. After trying this recipe, you may never buy store bought tortillas again.

You’ll want to make a double batch of these homemade flour tortillas every time. One batch is never enough! Little hands always sneak into the kitchen when I start making these. There are just too hard to resist.

Try these tortillas with melted shredded cheese (quesadilla), cinnamon sugar or drizzled honey, with your favorite taco fillings, or in one of these recipes.

« Organic Lotion Bars Made in a Crock Pot
What is Geocaching? See How You Can Add More Fun When Getting Outdoors… »